Here's a joke for you 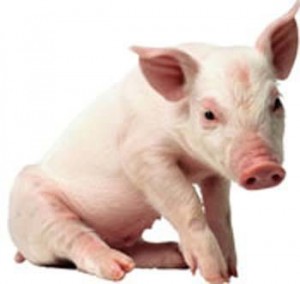 A city slicker and his wife move out to the country.
He decides to raise pigs.
He goes off one day and buys four pigs.
When he gets home he realizes all his piggies are girls.

He calls his farmer neighbor and asks if he can bring over his piggie girls to visit his big pig.
The farmer agrees and the city slicker loads up his girls in the truck and drops them off.

A couple of days later, he goes back to pick them up and asks the farmer, "How will I know they are pregnant?'
The farmer tells him, "When you see the pigs grazing you will know, as pigs do not normally graze."

The city slicker watches the girls for a couple days and no grazing.

He calls the farmer and asks again, if he can bring his piggies back to his farm. The farmer cheerily says, "Sure, bring 'em on over."

So, he loads them back up in the truck and back to the farmer they go.

A couple days later, he loads them back in the truck and brings them home.

Over the next couple days, the city slicker diligently watches for the pigs to start grazing.
Nothing.

He continues bring the girls back and forth to the farmer for the next six months.

One morning after the stay at the farmer's, the city slicker can't stand it anymore. He calls out to his wife and says, "Honey, look out the window and see if our pigs are grazing."

She looks out the window.

She turns back to him and says,

"The girls are all in the truck and
one is beeping the horn."

Ps. I heard this told by Gary Muledeer. He does it much better!
Posted by xoxo at 11:59 PM No comments:

my momma is too tired to write tonight, so i sneaked the laptop away 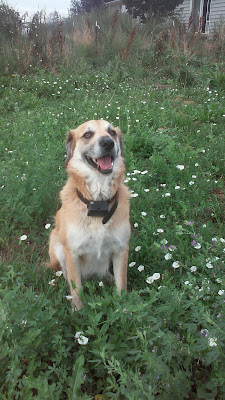 see my collar with the black box?
it's kinda nifty
momma bought and installed an invisible fence for us monkeys
we have the run of almost five acres!!
we really dont need the collars anymore to remind us where we cant go
but momma still worries about us running across the road
we have even sneaked out of the house
run around all day in the yard
and before momma came home
we ran into the house acting all innocent
but we forgot to shut the sliding glass door behind us 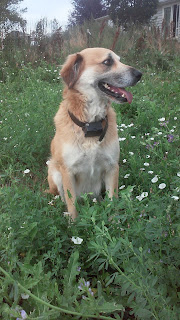 arent i the most handsome boy?
and momma says im the one with the sweetest nature
i was the runt of the litter and im still the smallest of the monkeys 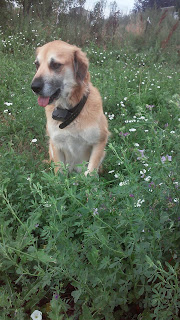 since i am the smallest, i make sure when i bark,
i sound like the biggest, toughest monkey around 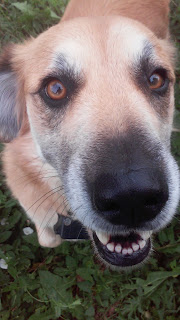 but, im a lover
not a fighter

So, Monday was my last day of vacation,
and since I am such the adventurer...
I went out into my yard.
I looked for bugs.
Yep, that's what I do!

Anyhoo.... I found a bunch in about ten minutes and here are a few.

The Good and the Bad Guys.


(I swear, if any one ever finds my phone, they will wonder what kind of nut owns it.
Only pics of dogs and bugs and Mapquest screenshots.) 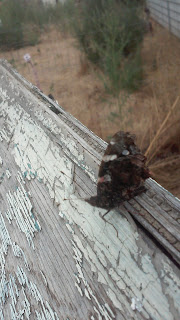 Now this little fellow, he was interesting. He let me get so close to him.
It's really a shame he is so drab.
He flew away.
Then he came back to where I was sitting. He landed within inches of me.
Little bugger showed me! He flashed me a couple times. Then flew off.
I swear I heard him laughing a the look of surprise on my face!! 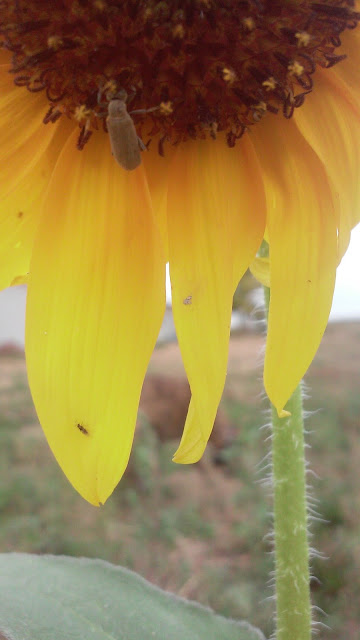 Don't know what type of insect this little fellow and his teeny friend are, but they made a nice picture.

PS. If someone found your phone and didn't know you personally, what kind of weirdo would they think you are?


That's right my friends and pals, no.

A jury of peers...my patootie.

I have sat on juries, willingly and unwillingly. If these are my peers and those of the defendant, well, I have a very inflated view of myself. (Which is quite possible, however, doubtful.)


I believe the entire justice system is broken.

The best part of this? If I refuse the summons?

Any person summoned for jury service who fails to appear as directed shall be ordered by the Court to appear and show cause for his or her failure to comply with the summons. Any person who fails to show good cause for non-compliance with the jury summons may be fined $1,000.00, imprisoned for not more than 3 days, ordered to perform community service, or any combination thereof. (***Title 28, U.S.C. Section 1866(g)***).

So, if I refuse to show up, the government takes my money and up to three days of my freedom. If and when I am asked any questions, I will offer only a two word response.

That, in it's self, should make the lawyers dismiss me on the grounds that I am a troublemaker.

Ps. If you don't see any posts after September 28th, suspect the worst and call the media! HA!
Posted by xoxo at 11:59 PM No comments:

Email ThisBlogThis!Share to TwitterShare to FacebookShare to Pinterest
Labels: Life

Agreed! It has been a ridiculously long time since my last post.

Last night, my brain decided to go rogue which is not unusual. But the problem it creates....
I can't sleep worth a damn.

My brain decided to draft a letter (AS MY HEAD HIT THE PILLOW!!!) to Will Smith and Jada Pinkett-Smith about the decor of their home.

Then it switched to thinking about a service manger who just left us, who is coincidentally...black. (I don't think it is a coincidence that he is black, I'm fairly certain that his parents are also black.)


Which lead to the revelation that, I, myself, am also African-American. More on that later.


Which led my brain to conclude, I need a release.

So, I will resume blogging so my brain can vomit out all the ridiculousness, so I can sleep in peace.

So, look forward to such blog titles as:

For Pete's Sake, Learn to Drive

What the Hell is That?!


As always, thank you for giving me your time.

Email ThisBlogThis!Share to TwitterShare to FacebookShare to Pinterest
Labels: Life